Let Future By Lund take control over the music they use in their movies. Empower them to be creative when working with the music for their movies

How we did it

First we mapped out the ”sound identity” for Future By Lund. We did this by looking at their graphical profile, their core values, their goals and which areas they might use audio and music the most. This ”sound identity” is the foundation to all audio the we create for this company, it is from the sound identity that we draw all sources of sound such as instruments when composing music. It also gives us a direction on how to process and mix the audio. When the sound identity was in place we composed and harmonized their core melody. From this melody and chord sequence we then created a sound logo that goes with their graphical logo. After that we composed three musical pieces from their melody and sound identity, all with different feelings. The feelings we chose where the three main themes in their current communications. The three pieces where then decided into three layers of sound that could be stacked on top of each other or played separately depending on what effect you want the music to have on the movie and also depending on where the focus lies in the movie. Lastly we created an outro the movies.

This framework for working with music in movies allows the employes to be creative with how they use their own music when creating movies. Since the company now has their own music they never have to license music to use in their movies ever again which will save them money in the long run. They also have the possibility to expand on their sound identity to work even more with branding. 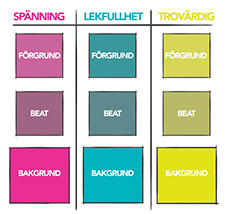 "This tool is even more poweful than I thought

when you first presented it"